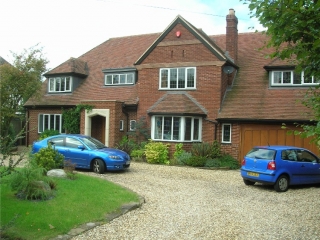 Although not a replacement dwelling per se, the extent of alterations undertaken at this project on the edge of the green belt was extensive. The challenge was to create a design solution that incorporated key characteristics of the original dwelling harmoniously with the significant extensions proposed, the result being the appearance of that of a new dwelling designed from scratch. The property footprint was almost doubled in size. Most of the internal spaces were rationalised or extended, with the number of bedrooms to the property increasing from four to five, three of which benefited from the addition of ensuites. In light of the increased size of the dwelling, a larger entrance hall with first floor galleried landing was provided, allowing flowing circulation horizontally and vertically around the dwelling. Generous kitchen and family living spaces were spread across the rear elevation so as to benefit from the garden aspect with views out onto green belt land.

The property is currently on the market with Walton & Hipkiss’ Hagley office for in excess of one million pounds.

Thanks to Andrew Hipkiss of Walton & Hipkiss for use of his internal and certain of the external photographs.

Permanent link to this article: http://arnicholas.info/dwelling-overhaul-hagley/